What's Makes A Beer Hazy? The Answer Is More Complicated Than You Think.

CLOUDY, MURKY, JUICY, UNFILTERED, HAZY - IPAs have taken on many forms over the years. So what's the deal with Hazies anyway, and how do you know you are drinking one? What should you expect when you spend your hard earned money on one of them? The truth is it's a moving target for consumers and brewers alike. Let's jump into it. By the way, I am going to be saying the word hazy a lot. It might lose meaning or it might be the greatest drinking game ever. Oh and for the purposes of clarification, I am going to differentiate Hazy with a capital H in reference to a style; as in "I like Hazies", as opposed to a lower case h, as in "that is one hazy beer". Got it? Let's roll.

Ask any brewer how they like their Hazies and you are likely to get as varied an answer as how do you like your coffee? Part of that lies in our own tastes, after all we are human and we are also consumers, but part of it also lies in a sense of pride that we are brewing something acceptable by the guidelines and standards set forth by our peers and industry professionals. I'm speaking, of course, about beer style guidelines. Adherence to these guidelines is a tricky labyrinth to navigate, especially in the craft beer segment. Any respectable brewer will tell you there is nothing like the satisfaction that comes with brewing a solid Pale Ale or Pilsner, not necessarily because they are the most challenging, but because they are a symbol of mastering the basics; a right of passage so-to-speak. Hazies represent an interesting shift in what brewers are being expected to produce and in many ways require brewing techniques to be implemented that are a direct contradiction to what they've been trained to do for decades. We asked our Director of Brewing Ops, Chris Baker to weigh in:

"Working for production breweries, dating back to my years at Stone Brewing, taught me to employ methods to improve clarity, increase shelf-life, and brew bitter, West-Coast beers. Now all of a sudden I am being asked to brew beers that are hazy, low bitterness, and fruit forward in the New England style. It's definitely been a challenge to re-program my brain."

Clarity: Low to very high degree of cloudiness is typical of these beers. Starch, yeast, hop, protein and/or other compounds contribute to a wide range of hazy appearance within this category. -Brewers Association Style Guidelines, 2020

But wait...what does juicy OR hazy mean? 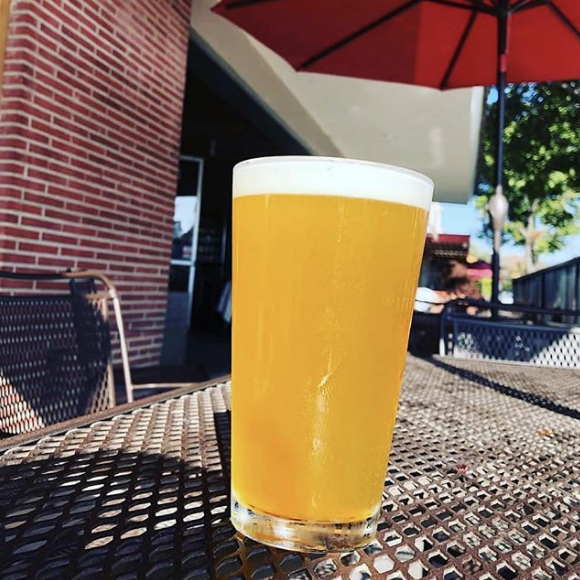 Seems like there is a lot of room for interpretation, you say. Well there is. Check out the photo above of three different levels of hazy. All acceptable depending on what you call it. We don't have a magic tool for measuring the level of haze, or how opaque the beer is. It's all up to the eye of the beer-holder. Haze is influenced by many factors, including raw ingredients and brewing techniques. For example, malts with a high-protein content may be chosen, or a yeast strain (responsible for fermentation) that has a low flocculation (ability to clear up in the beer) to name a couple.

At the end of the day the brewer has to brew what he or she is proud of and something that represents the style, which leads us to the second piece of the puzzle: Consumer expectations.

Nothing is more frustrating than getting something you don't expect. Especially when you paid for it. That's why to some degree it's really YOUR definition of a Hazy that we are brewing. Now here is the challenge: How do you define what you want to drink, when clearly, the topic is incredibly convoluted? The answer is that it's always changing. As styles change, so do consumer preferences, and as your preferences change, so do our methods. It's dynamic. And its happening as you read this. What's interesting is how subjective it is for this style of beer specifically. I don't ever remember a conversation happening regarding the level of "oatness" in an oatmeal stout, or the amount of blackness in a Stout. If its dark, its dark. If it has oats in it...cool, sounds good. So why all the analysis-paralysis? My hypothesis is that the advent of social media and peer reviews, combined with an increasingly savvy consumer is likely responsible, and that's not a bad thing. Knowledge is power, so long as it's used responsibly, all the better.

Where does that leave us as a supplier, and you as the drinker? Like most things it's important to recognize and appreciate the nuances of each and celebrate diversity in sub-styles. Expecting the same flavor profile, appearance, or hop/malt characteristics in every beer is going to let you down. Every brewer brews to a different style based on what his/her customers are demanding and what his/her individual tastes are.

WHAT'S UP WITH THE VARIATIONS?

Here is a brief breakdown of Hazy terms for reference. Other terms have emerged in the last year, but these are the ones creating the most confusion and controversy. This is subjective but generally accepted lingo. Think of these as Urban (Beer) Dictionary terms:

'Hazy' - A general term that can include both a beer's appearance regardless of style and/or a specific type of IPA. Example - Hefeweizens are technically hazy but it would be rare to refer to one as such. The NE or New England variety references a distinct type of Hazy on the sweeter side of the scale. West Coast breweries essentially took that concept and fused it with the dryness the region's IPAs have become known for.

'Unfiltered' - Like Hazy, unfiltered can mean a style or appearance, but it leaves more latitude on the clear side. For example, a beer could be unfiltered and still look totally clear, whereas if you labeled a Hazy 'unfiltered' that would also be acceptable.

'Juicy' - A synonym for Hazy when speaking about a specific style, mainly because many Hazy beers have a juicy quality due to their full body and sometimes sweet finish. Combine the juiciness with very fruit-driven hop characteristics and the beer can taste like fermented fruit juice. However, sometimes a clean beer (meaning clear rather than hazy) can have juicy qualities too. Our Hop Diggity DIPA for example is extremely juicy despite not being a Hazy.

'Murky' - Like juicy, murky can refer to a beers appearance, but mostly it's a buzz word for a brand of extremely hazy beer. On the sliding scale of Hazies, this is the most opaque.

'Cloudy' - A term purely used to describe a beer's appearance, not any kind of stylistic reference.

At the end of the day I think most people would agree that a reasonably accurate description of a Hazy is a beer that possesses the following subjective qualities:

As you can see, brewing a Hazy is very much based on a sliding scale, and as consumers to move the target, we will continue to recalibrate our sights. Hopefully when you open your next can-o-goodness, the brewer hit his target.

For a fantastic example of the style check out the latest release in our Project X Series - Alone in Space Hazy IPA (HIPA). Find it near you at our beer finder.

Interview With A War Hero: 13 Years Ago Joey Paulk Traded His Hands For Our Independence

Lagers Blow. No They Don't - Here's How to Enjoy a True Classic, Sans Millennial Bias.